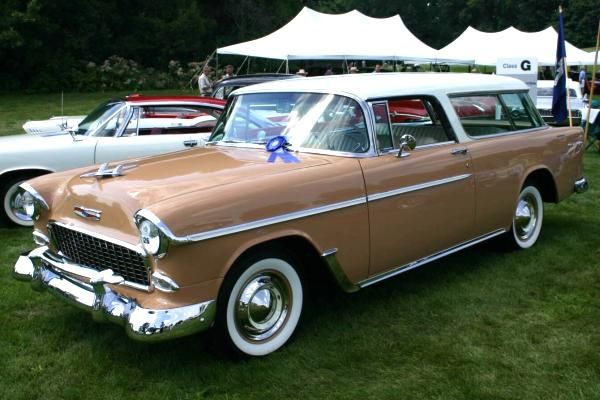 
The Chevrolet Nomad was a station wagon model made off and on from 1955 to 1972, and a Chevy Van trim package in the late 1970s and early 1980s, produced by Chevrolet. The Nomad is best remembered in its two-door 1955–57 form, and was considered a halo model during its three-year production as a two-door station wagon.

1955 Chevrolets received all-new styling. Advertised as "The Hot One," the boxy new Chevy was crisp, clean, and thoroughly modern-looking. Nomads, like Bel Airs, came loaded with interior carpet, chrome spears on front fenders, chrome window moldings, and full wheel covers. For 1955 Chevrolets gained a V8 engine option. The new 265 cu in (4.3 L) V8 featured a modern, overhead valve, high compression, short stroke design that was so good that it remained in production in various forms for many decades. The base V8 had a two-barrel carburetor and was rated at 162 horsepower (121 kW), and the "Power Pack" option featured a four-barrel carburetor and other upgrades yielding 180 brake horsepower (130 kW). Later in the year, a "Super Power Pack" option added high-compression and a further 15 brake horsepower (11 kW). It had room for six passengers.

1956 Chevrolets received a face-lift. This gave Chevys a more conventional full-width grille, pleasing those customers who didn't like the Ferrari-inspired '55 front end. Nomads now carried the same interior and rear-wheel sheetmetal as other Bel Airs, lacking the original's unique trim. Shoulder harnesses, and a padded dashboard were now available. For 1956 Chevys hid the gas cap behind a left side, flip-down tail light.
1957 V-8 engine displacement grew to 283 cubic inches (4,638 cc) from 265 in 1957, with the "Super Turbo Fire V8" option producing 283 horsepower (211 kW) with the help of continuous fuel injection. These so-called "fuelie" cars are quite rare, since most Bel Airs were fitted with carburation. While considered to be a milestone vehicle design, General Motors discontinued the original Noma
Nomad Chevy Nomad - Call for price

Be the first to ask a question about this listing!

You have no listings to compare